The l484 pill is a white oblong tablet known as acetaminophen 500 mg, ibuprofen, or paracetamol.

It is an analgesic (pain relievers) and antipyretics (fever reducers) drug used for treating fever and pain from different conditions.

Acetaminophen capsule works perfectly to relieve pain from menstruation, headaches, back pain, arthritis, muscle aches, fever, and many other symptoms. (1)

However, its massive overdose can lead to chemical-driven liver damage known as hepatotoxicity.

According to the New England Journal of Medicine, acetaminophen overdose can cause liver injury.

In their study on 71 patients with acetaminophen overdose, 50 of them took the overdose for a suicidal mission, while the remaining 21 patients took it for quick pain relief.

Although the 50 patients on a suicidal mission took a higher dose of the pills with l484 imprint, the remaining 21 patients had higher death and injury because they had a higher frequency of chronic alcohol abuse.

The study linked alcohol abuse to a greater risk of liver damage. 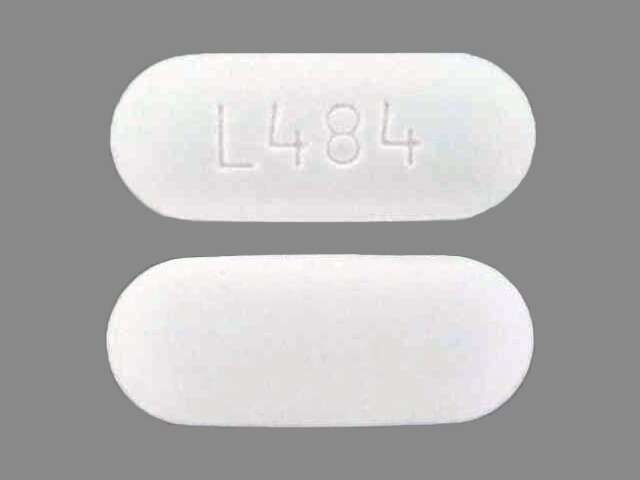 This pill with l484 changes the way our system perceives pain by increasing the pain threshold. It also signals the brain regulates body temperature whenever it is high.

Uses of an acetaminophen tablet (paracetamol)

Paracetamol is used to treat several conditions, such as

The maximum dose of acetaminophen a healthy adult can take a day is 4,000 mg.

However, taking such a high dose for a long period may cause liver damage in some people. It is advisable to take a lower dose of around 3,000 mg per day for better health.

Below is the normal paracetamol prescription an adult can take in a day.

Acetaminophen overdose may cause some side effects ranging from mild to serious, and may even lead to a liver transplant or death.

We should always be careful while taking paracetamol and other medications to make sure it doesn’t contain paracetamol.

Below are some l484 pill side effects.

Stop taking acetaminophen once you notice any of the above side effects and report it to your doctor for proper diagnosis.

Before embarking on paracetamol ingestion for ill-treatment, enquire from your doctor about things to avoid.

Acetaminophen interacts with some drugs, alcohol and other things to cause mild to life-threatening side effects

Below are some medications that interact with l484 pills:

Acetaminophen during pregnancy and breastfeeding

Pregnant and breastfeeding mothers often use paracetamol for pain and fever relief.

The medication is considered safe during this vital period.

However, recent studies have linked prolonged use of the medication to impairment of neurological development, attention deficit hyperactivity disorder (ADHD), and autistic spectrum disorder (ASD).

It, therefore, recommends short-term use of painkillers during breastfeeding and pregnancy since prolonging the use of it (28 days and above) comes with serious side effects. (4)

High consumption of alcohol while on Tylenol medication increases the risk of liver toxicity.

This is because the liver converts more of the paracetamol into toxic byproducts.

Men should avoid taking more than 2 bottles, while women take 1 bottle per day when taking l484 medicine, to avoid complications.

This pill should not be for someone allergic to paracetamol, or someone suffering from asthma, bleeding disorder.

Care should be taken when giving medication to pregnant and breastfeeding mothers to avoid complications.

You should store the drug in a tight container, at room temperature.

It should be kept out of reach of children.

Yes, you can take the medication to relieve pain and fever, but it shouldn’t be prolonged, as prolonged use of acetaminophen during pregnancy affects the fetus.

Yes, acetaminophen 500 mg, L484, paracetamol, and Tylenol refer to the same drug. L484 is just an imprint on the drug, while paracetamol and Tylenol are its trade names.

For the recommended dosage of acetaminophen for children and adults, ask your doctor, or check the dosage here

The L484 pill is an analgesic (pain reliever) and antipyretics (fever reducer) drug used to treat fever and pain.

If you miss a dose, take it as soon as you remember it. If you’re close to the next dose, skip the missed dose and continue with your regular dosage schedule. Never take an extra dose.